Due to its large population base, China has become the world's largest seafood market. Statistics show that the global annual seafood consumption is 144 million tons, and in China it's 65 million tons, which is five times higher than the second-largest European Union's 13 million tons.

In 2019, 78% of China's seafood products were from aquaculture (rearing/cultivating of aquatic animals), while only 22% were captured. Aquaculture in China accounts for nearly 70% of world aquaculture production. 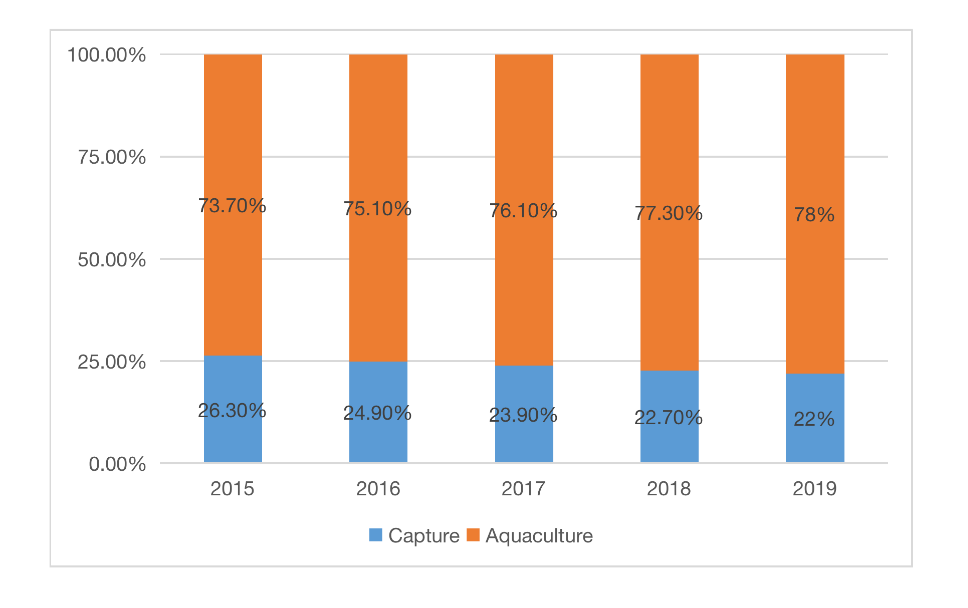 Comparison of Aquaculture and Capture Products in China from 2015-2019, ChemLinked

Premium seafood appreciated by Chinese consumers include lobster, crab, salmon, oysters, shrimp, sea cucumbers and many others. They tend to place more trust on seafood’s' origins, like lobsters from Canada and Australia, oysters from France, and salmon from Norway.

King Crab from Russia in Freshippo supermarket, the Internet

Lobster, Oyster and Salmon in Freshippo App, the Internet

Freshippo allows the consumer to shop online through its app and pick products directly in its physical stores. It integrates supermarkets, restaurants, e-commerce merchants with logistics. It had 250 stores by 2019 with a 67.8% annual increase in store numbers and had the fastest growth in sales among all chain supermarkets in China.

The top 10 most popular seafood imports in the Chinese market were:

China is the world's largest king crab consumer market. In 2019, China imported over 10,000 tons of king crab, which was only 1,500 tons in 2015. Statistics show Shanghai's import of king crab from Russia ballooned by 950% in 2019 compared with the same period in 2018 to reach 850 tons [3]. With lower retail prices and sufficient supply, king crab becomes more common and popular in China.

The outbreak of Covid-19 has impacted China and the global seafood market. According to the statistics, the import of seafood in China in the first quarter of 2020 fell by 27% from the fourth quarter of 2019, a 6.2% decline year on year. The value of import seafood in 2020 H1 declined by 16.5%.

Since June 2020, demand was gradually returning to 2019 levels and there are obvious increases in sales of seafood consumption during the National and Moon-Cake holiday. Boston lobster has been the most popular imported seafood due to lower prices since June with more than 60 tons daily wholesale volume, according to the General Manager from Shanghai Jiangyang Aquatic Products Market.

Although the Chinese market has recovered earlier than other countries worldwide as the pandemic is well controlled, there's still impacts on seafood import. Except for the uncertainties of global production and supply, imported seafood's safety is a pressing issue. At least nine Chinese cities reported cases of imported frozen products contaminated with the novel coronavirus since early July. China's customs authority also suspended imports from three Ecuadorean shrimp producers on July 10 after samples collected from their shrimp's outer packaging tested positive for the virus in several places.

Notice on passing the nucleic acid test for each batch of imported seafood and meat in Freshippo supermarket, China Daily

At ChemLinked, we assume China's seafood imports will slightly drop in 2020 due to the global pandemic and trade tension uncertainty. But in the long term, the seafood market is a booming sector as increasing amount of Chinese consumers would like to taste fresh and quality products, and they regard seafood as an excellent source of protein and light in calories. The problem is to make sure it’s safe and available.